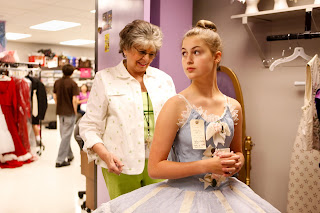 Well, I might seem a bit biased with this interview, because as you all know by now, I am a proud ballet mom. Even if she didn’t belong to me, I would think Gabby Saucier is pretty special.
This has been a fabulous year of growth and progress for Gabby in ballet. She played the lead in Rudolph the Red-Nosed Reindeer in December, 2011. This is a pretty big deal because age 13 at that time and in the 8th grade, she is the youngest lead for Rudolph ever cast. In addition to that, Gabby is the youngest main dancer in the production of The Sleeping Beauty. She plays Fairy of the Enchanted Garden in the prologue, friend to Aurora in Act I and The White Cat in the finale opposite Lake Charles native turned New Yorker William “Billy” Ward who performed for 26 years with the New York City Opera. Gabby is a couple of years younger than her fellow fairies.
Gabby and I talked about her upcoming roles in The Sleeping Beauty. Being a fairy is quite different from the character roles she is used to, “[Fairy of the Enchanted Garden] is pleasant and graceful. The changes in her character are not as overt, she is more consistent.” Gabby says that being a fairy is fun and she is close friends with her fellow fairies. Although the role has been challenging it is all coming together, “I’ve grown as a dancer and gotten better.” 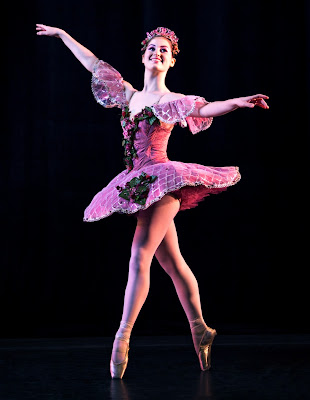 The role of The White Cat is one that Gabby really wanted especially because her favorite part about dancing with LCCB is portraying a character. “When we went to Houston Ballet last year to watch their Sleeping Beauty I said, ‘I want that part!’” The pas de deux of The White Cat and Puss in Boots is always a crowd favorite because it is full of comedy. This is Gabby’s first time partnering. She had the opportunity to work with Billy Ward, LCCB’s Puss in Boots, a little bit this summer, which was great. “He is so nice and funny, and really tries to make me feel comfortable. The lift is challenging for me because I have a hard time remembering to lean back, but I’m getting it.” It’s also nice that Billy is finally here in Lake Charles for performance week, “It is fun to act with someone because you can feed off of the other person, and Billy is good actor.” I asked Billy if he has anything to say about working with Gabby, “I’m excited to dance with Gabby; her playful charm and talent match her sweet nature, and she’s a perfect White Cat! Gabby also has the ‘adorable factor,’ that would make any guy in his right mind want to share this role with her. She’s attentive and eager to take advice and apply it quickly to our partnership. It’s a great gift to me when a dancer has no ego and rehearsals flow and become what dance really should be: shared joy. I think when this is all over I’m going to feel a little sad..”
I think we all will feel a little sad too, Billy.
Gabby is the 14 year old daughter of Kelley and Luke Saucier of Lake Charles. She is in the 8th grade at Bishop Noland Episcopal Day School. Gabby has performed in numerous LCCB productions, and fondly remembers her debut performance in 2001 as Raggedy Ann in Rudolph. Gabby recently starred in the title role of Rudolph in the 2011 LCCB Christmas performance. She has studied ballet for 12 years, the last 10 at Lady Leah Lafargue School of the Dance and Lake Charles Civic Ballet. Gabby also participated in summer workshop at Dallas Metropolitan Ballet in 2010.
Top photo (with Ray Delle Robbins) by Cameron Durham / Dance photo by Romero & Romero Photography
http://lakecharlescivicballet.blogspot.com/feeds/posts/default?alt=rss
Tweet Pin It My name is Billy Ward, and I’m proud to have started my life in dance at Lake Charles Civic Ballet.
My sister Rebecca danced with Lady Leah from as early as I can remember. Lady’s son Bill was a childhood friend of mine, and one day, my brothers (Clay & Norman) and I were enlisted by Bill to work backstage. As we were tying a giant backdrop of Oak Alley to a pipe, readying the stage for one of Lady’s signature ballets, she walked out of the darkness of the upper stage-right wings. She was pure raw energy; you could feel her presence moments before you saw her. Until that day, I’d never met this tiny, confident, beautiful woman.
She introduced herself: “Hello, I’m Lady Leah, director of the Lake Charles Civic Ballet. Thank you so much for helping us.” Wow! She was the stuff of old southern lore. A lady in all aspects, and the director! I was speechless, which was normal for me at that point in my life, as I’d been diagnosed with an extreme case of dyslexia. I still don’t care much for the word failure, but the fact is before that day, I was a failure. In my childhood, defeat after defeat left me a shell, a numb and frightened kid who didn’t care about learning. I didn’t even want to try anymore. How many times could I take the blame for not applying myself or being lazy? The moment I met Lady Leah, I guess God intervened!
Lady walked up to me and asked me to take off my shoes and point my foot. Just like that, right out of the blue! I thought, this Lady is nuts! Anyway, you didn’t say no to Lady Leah, so I took off my shoe and mimicked what I thought a pointed foot was. She looked at me and said, “You have to be a dancer.”

I thought; get me out of here quick! No way am I going to do this stuff. I like being around beautiful girls in leotards, but I’m not dancing! Well, the next thing I knew, she had set up a class to teach some of the guys – including my brothers – to learn to lift the girls and to do a polka, in case she needed us for a ballet she was choreographing called Buckskin Believers. In class she started sneaking in a ballet step or two. I remember jumping across the floor with my brothers as Lady counted out the music for us, screaming, “Jump boys!” I was stunned at the joy and camaraderie I felt, doing the step and sharing it with my brothers. It felt right to use my body like this, in a centuries-old art form I was doing without too much difficulty.

About a week later, I showed up for the class but guess who didn’t? All of the other guys! I grabbed my backpack and tried to get out of the room without Lady seeing me, but she nailed me, saying, “Billy Ward get to the barre between Missy and Renee and do what they do.”

I left Lake Charles the next year with a full scholarship to the 2 best ballet schools in America! If it weren’t for Lady being the force of nature and the complete “total theatre” experience she is, my life may have taken another turn. I owe her everything; I learned to believe in myself because of her support and excitement in my dancing. I thank her every day and know even now, as I am still dancing with the New York City Opera, that my wonderful life, my joy, was uncovered for me by her.
Thank you, Lady, for dreaming and telling me daily you knew I could do it! Nothing is impossible…
http://lakecharlescivicballet.blogspot.com/feeds/posts/default?alt=rss
Tweet Pin It